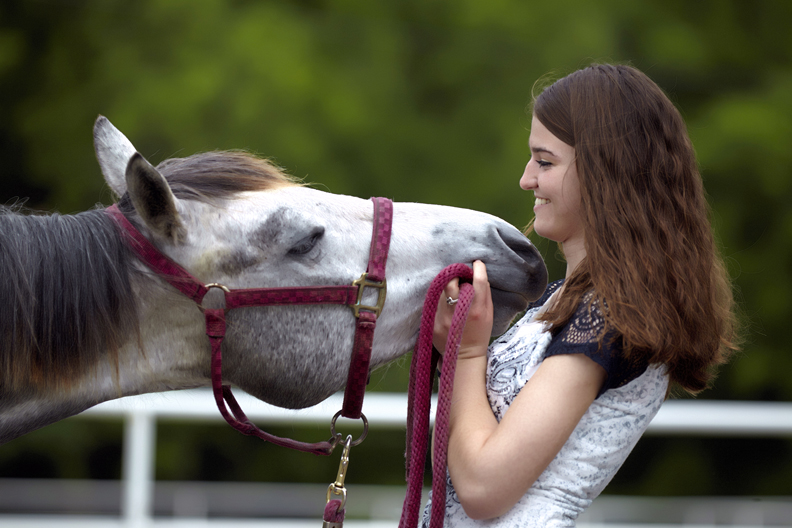 Shoreview, Minn. – Every horse owner has had that one special horse, the one that has changed it all. For many, their iconic horse entered their lives after giving to others. This second career is possible through horse adoption.

“By adopting, people give horses a second career or a second chapter,” says Mike Jerina, equine research manager at the Purina Animal Nutrition Center in Gray Summit, Mo. “We are proud to be a part of this adoption story.”

Jerina says the Quarter Horses bred at the Purina Animal Nutrition Center spend their first few years helping millions of other horses by participating in feeding trials. Research specific to equine nutrition has been conducted for more than 87 years. Some of the horses stay on the 1,200-acre farm, while some go onto their forever homes across the country.

Two of these adopted horses have belonged to the Ley family in Fort Atkinson, Wis. The first, a horse named Senor, was adopted by Kirsten’s grandmother, Judy, from Purina in 1996. After Senor passed away, the story continued when the Leys returned to the state-of-the-art farm to adopt Desi, a relative of Senor.

During their drive from Wisconsin to Missouri, the Ley family looked back on all their years with Senor. Kirsten, 19, thought of her very first memory –watching her cousin show Senor at the county fair. She reminisced about her own success in the show ring. Most of all, she was thankful to Purina for making Senor available for adoption.

“Senor was my best friend growing up. I spent almost every day with him. Through the years, I didn’t realize that he was changing my life, but looking back there’s no doubt that he did,” Ley remembers.

Kirsten’s mom, Kim, looked back on the memories as well, focusing more on the kids’ lives that Senor changed.

“When Kirsten went off to college, I knew that she had grown up, and Senor had grown up as well,” she says. “He grew with us, because he was a part of our family. After nineteen years with us, we unfortunately lost Senor. Adoption was our chance to continue Senor’s story and begin a new one.”

The next chapter begins with Desi- the young Quarter Horse at the Purina Animal Nutrition Center who traces back to the same lineage as Senor.

“When we made it to the Purina Animal Nutrition Center and saw Desi, it was like Senor had sent him to us,” Kirsten smiles. “He has the same white snip on his nose and seemed like he already knew me. We could not be happier.”

The happiness from these adoptions is reciprocated by the Purina team who raised both Desi and Senor.

“Adoptions like these give both the horse and families a new chapter, but all adopted horses don’t have the same luxuries as our horses,” says Mike Jerina. “There are thousands of horses in need across the country available for adoption. We recommend contacting A Home for Every Horse to connect with your next horse.”

Purina is the proud title sponsor of A Home for Every Horse. Through the partnership, Purina has donated over $425,000 to participating horse rescue shelters. A Home for Every Horse works to connect rescue horses in need of homes, in over 600 rescues across the United States, with people looking for horses. To make the connection, rescue organizations can list their horses for free on Equine.com.

Purina Animal Nutrition LLC (www.purinamills.com) is a national organization serving producers, animal owners and their families through more than 4,700 local cooperatives, independent dealers and other large retailers throughout the United States. Driven to unlock the greatest potential in every animal, the company is an industry-leading innovator offering a valued portfolio of complete feeds, supplements, premixes, ingredients and specialty technologies for the livestock and lifestyle animal markets. Purina Animal Nutrition LLC is headquartered in Shoreview, Minn. and a wholly owned subsidiary of Land O’Lakes, Inc.