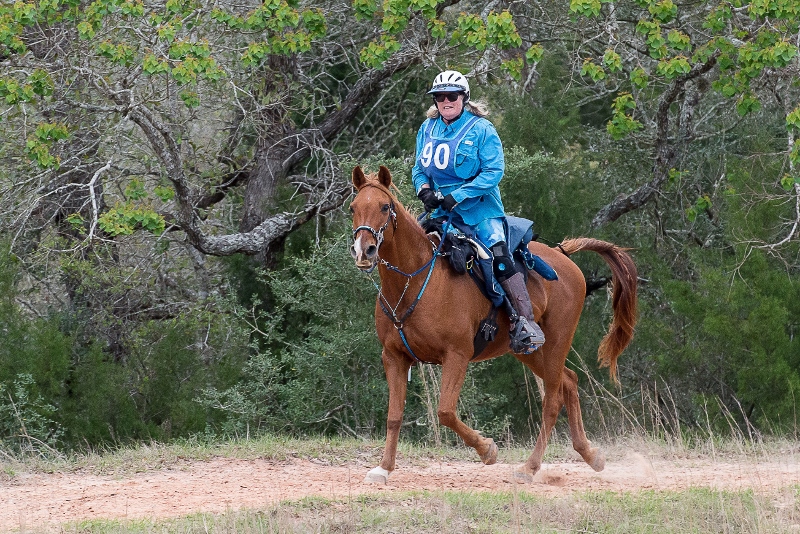 Three years ago, Ted was 14 when friends gave him to Jonni. With conditioning, he bloomed into a handsome horse with a willing-to-please attitude, who won his first National Championship in 2016, his first year of competition.

Ted is Jewell’s second President’s Cup horse and could not be more different from the first one, a bay Arabian called Hank. Says Jonni, “Hank naturally took excellent care of himself on the trail eating and drinking constantly. Ted never passes up food, but he is not one to drink well on the trail. I tried different methods to get Ted to drink better on the trail, and finally decided he would drink when he was thirsty. Hank always had his own agenda and I had to figure out quickly how to make things my idea. Ted, on the other hand, really does want to please, tries very hard to do what I am asking, and not second guess me like Hank would.”

Throughout the ride year, this winning team was chasing another rider in points. It took trailering 9,800 miles and 13 rides, with five firsts, five seconds, two thirds and one fourth, to clinch the Cup at the final ride. Through this outstanding performance, Ted and Jonni also earned his second National Championship, the combined horse and horsemanship award (Jim Menefee Memorial), 1st overall heavyweight class horse, 1st overall heavyweight class horsemanship, 1st heavyweight class in their region, high point Arabian, and Ted’s 1000 mile award. All this in spite of Ted having been laid off for two rides because of a stone bruise.

Tezuby must be a living example of the old saying, “Don’t look a gift horse in the mouth.” What does Jonni think? In accepting the award, she said, “If you have a dream, don’t give up on it. One of my favorite lines from a song is ‘Keep on dreaming, even if it breaks your heart.’ You just never know when a dream may turn into what you think is impossible, possible.”

NATRC, the United States’ oldest and largest long distance competitive trail ride organization, is open to all equine breeds and disciplines. It offers rides with several divisions providing challenges for those new to the sport as well as for experienced competitors. NATRC invites folks to see what they and their horses can achieve and offers free membership to those new to the organization.  www.natrc.org.