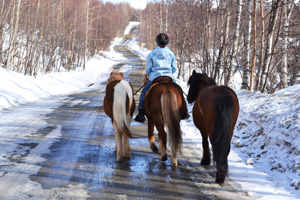 I’m a returning rider who acquired more than my share of fear-based baggage during my thirty-year riding hiatus. This metaphorical suitcase sprung open and spewed its contents ten years ago when I started riding my 4-year-old mare, Raudi. In time, I proclaimed to friends that she was bombproof. It turned out I was wrong. A year ago, we were confronted with the largest, noisiest snowplow that ever graced the residential roads of Alaska.

Still the fearful rider, I tucked into a crouched position so my diaphragm and intercostals couldn’t do their job. Raudi did a sharp 180 and bolted. Unbalanced, I flew off her back and she kept going. The snowplow went around me. Raudi turned into our driveway seconds before it caught up with her.

A breathing-related turnaround occurred soon after. I read Sally Swift’s Centered Riding and enrolled in anatomy and physiology courses. Perhaps, I thought, I should familiarize myself with the anatomy and physiology of the human respiratory system—in particular, the diaphragm—and become more aware of my body. I might then be better able to deal with the unforeseen and help both Raudi and myself.

Awareness means to call attention to, focus upon, or pay attention to. I decided to play around with the idea of self-exploration by doing an experiment. Key to this was remembering that the diaphragm is a powerful muscle that lies beneath the rib cage. The front of the diaphragm is at the bottom of the sternum, or breastbone. Its root is attached to the front of the lower spine. It’s shaped like a cone or mushroom and cups up into the rib cage. When you inhale, this muscle is pulled down, creating a vacuum in the lungs. When you exhale this muscle relaxes, the diaphragm rises and forces air out.

I began by focusing my awareness on my breath, first by sitting in my saddle, which I’d placed on a stand. Crouched over, I found it difficult to catch my breath. Sitting upright, my breathing was slower, more rhythmical, and my chest was more open. Indeed, the latter was preferable.

I remained aware of my breathing when I saddled up Raudi, led her down the road, pulled forth the mounting block, and prepared to mount up. I slowly exhaled as I looked upwards, placed my foot in the stirrup, raised my leg over Raudi’s back, and oh so slowly lowered myself into the saddle. Raudi lowered her head and snorted softly. I rewarded her with a wither scratch and a treat.

I did some creative visualization as we moseyed along. I pictured my breath as being sky blue. I then imagined it moving like warm water, down my middle, and into my thighs, knees, calves, legs, knees, ankles, and toes.

I next did as Swift suggests, and put my hand on my belly and my thumb on my navel. Yes, I was breathing correctly, for I felt movement under my hand.

I subsequently put Raudi through her paces, doing walk, trot, canter and tölt transitions, all the while synchronizing my breath to hers.

In six months’ time, I was able to speed up and slow down Raudi’s rhythm and speed by remaining aware and at the same time regulating my breath. This was easier said than done because I also had to pay attention to Raudi’s footfalls which, of course, vary at differing gaits. It was also easier to do on the road than it was on the trails. But in time we became more synchronized.

I also worked at desensitizing Raudi to heavy equipment by doing groundwork and riding her while my husband was operating our tractor. We spent time around road graders and the like when construction work was taking place on a nearby road. This was first in the company of our other horses, then alone.

My efforts have paid off. I now feel more relaxed when riding Raudi out on the road. A case in point: yesterday a kid riding a snowmobile raced up behind us. Raudi froze and held her breath. I exhaled slowly, lowered my weight into my seat, wiggled my fingers and toes, and focused my gaze outward. The snowmobile passed. We then headed companionably down the road with me matching my breath to hers.