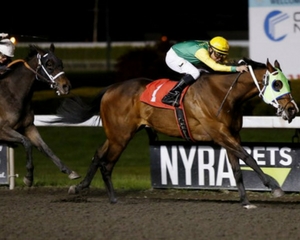 VALID KEIKI ALL THE WAY IN FRIDAY FEATURE

AUBURN, Wash. (April 28, 2017) – Valid Keiki would not be denied in his season debut Friday evening at Emerald Downs.

A 4-year-old Kentucky-bred gelding by Successful Appeal-Rumpus Room, Valid Keiki is 3-1-1 in eight career starts with earnings of $40,448, including $6,160 for Friday’s victory.

Friday’s race also was Valid Keiki’s first for the partnership of Two Putts For the Win, Russ Nakagawa and Brent Peterson, who acquired the horse privately last year.

Party for One, with Juan Gutierrez riding, gained second place by a head over Hoody and paid $5.40 and $2.60. Hoody, ridden by Erick Lopez, paid $2.20 to show.
Coming in Hot and Capital Expense completed the order of finish; Cause I’m Bad and Heroes for Ghosts were scratched earlier in the day.

NOTES: Midda’s Gold Touch ($37) rallied under Ronald Richard for a huge upset in Friday’s fifth race, running 5 ½ furlongs in 1:03.55 for trainer Robbie Baze and owner Karen Kirshner. Midda’s Gold Touch, a 9-year-old Harbor the Gold gelding, has 19 career wins but Friday’s win was his first at Emerald Downs. . .Friday’s $0.50 Pick 5 paid $3,617 and the $0.20 Pick 7 returned $5,100 to one winning ticket. . .Trainers Blaine Wright and Mike Puhich remain red hot this season, Wright improving to 7-for-14 with a victory by Swiss Script ($3.80) in race three and Puhich improving to 5-for-9 with a win by Thorn Legacy ($6) in race seven. . .Eswan Flores also had a riding Friday. . . Arviat Bay ($7) won the season’s first route race, leading gate-to-wire under Flores to give owner/trainer Shelly Crowe her first win of the meet. A 4-year-old Papa Clem filly, Arviat Bay ran one mile in 1:37.71. . .Nominations close Saturday for the $50,000 Seattle Stakes for 3-year-old fillies on Sunday, May 7. . .Live racing continues Saturday with first post 2:15 p.m. . .The $100,000 San Francisco Mile (G3) from Golden Gate Fields featuring Alert Bay, Stryker Phd and Star Student will be show on the big screen between the fourth and fifth race at Emerald Downs.