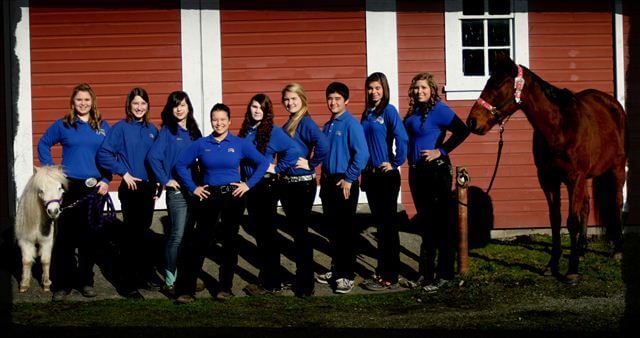 Ferndale High School is the only school north of Seattle that offers this rewarding opportunity to high school student equestrian athletes. Though the Ferndale team is small, it has all the components to achieve success: dedication, determination, and talent, which they showed during the first meet of 2012 held in Spanaway, WA in January. Throughout the weekend, the team competed in showmanship, trail, stock seat equitation, drill, poles, figure 8, bi-rangle, individual flags, canadian flags, barrels, keyhole, steer daubing, reining, and cow sorting.  Our highest scoring competitors were Robin Matsudaira who placed 3rd in individual flags, Emily Winkler who placed 2nd in reining, and Erin Abbott who placed 4th in showmanship and 2nd in trail. Recognition goes to Bailey Matsudaira for his fantastic barrel run, Erin Vandersypen and Brittany Elmquest for their great efforts in cow sorting, and all riders for their contributions to drill performance. Members include Robin Matsudaira, Bailey Matsudaira, Mikaela Sulak, Emily Winkler, Erin Vandersypen, Brittany Breedlove, Dolly Ling, Erin Abbott, and Brittany Elmquest. Team advisor is Tony Torretta, Ferndale athletic director is Vic Randall, co-coach Lisa Abbott, and head coach Allie Matsudaira. The Ferndale High School Equestrian Team is excited for the state meet to be held in Lynden, WA at the Whatcom County Fairgrounds on May 10 – 13, 2012. For more information about the Ferndale Golden Eagles Equestrian team contact Allie Matsudaira at [email protected].