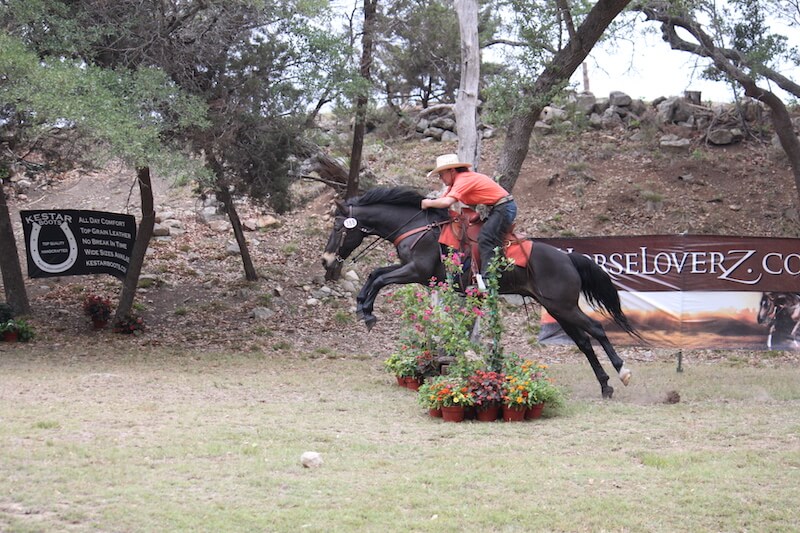 The American Blazer Horse is getting a chance at some national TV exposure thanks to BB’s Smokey Dun and Diane Robson of Post Falls, Idaho. The pair will be featured as one of 100 competitors in the reality show “America’s Favorite Trail Horse,” which begins airing Sept. 6 on HR-TV. The event was organized by American Competitive Trail Horse Association (ACTHA).

The show held auditions around the country then a week-long series of interviews, trail rides and filming, which Robson and Smokey attended, in May in Texas on the Franklin Family Ranch.

“Texas was an amazing adventure,” Robson said. “To be able to view the hill country of Texas by horseback convinced me I will NEVER be a Texan! Of course, it didn’t help that we left frozen mud puddles to ride in an 18-month drought and 100-degree heat.

“Smokey was such an incredible ambassador for the Blazer breed,” Robson added. “He is so bright and positive about everything. Everywhere we went people were drawn to him and it was exciting to educate people in a breed they had never heard of. He was right there for me during all the obstacles, photo shoots and the ‘hurry up and waits’.”

Now comes the time for the public to get involved in the equine version of “American Idol” as fans can vote for their favorite trail horse. You can see more pictures and learn more about BB’s Smokey Dun on his Facebook page. Then watch one of the series starting Sept. 6 to see Robson and Smokey in action, then vote to make the American Blazer Horse “America’s Favorite Trail Horse.”

To find out more about the amazing Blazer Horse visit www.blazerhorse.com.