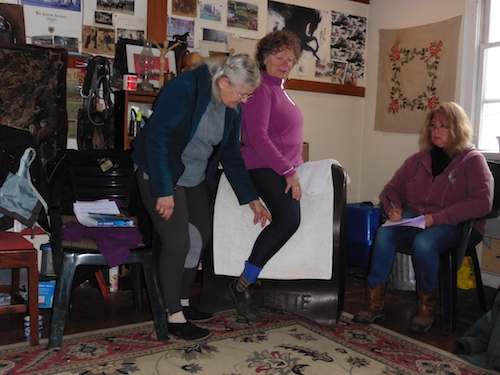 April was a significant month for me in terms of my Centered Riding training, both as an instructor and as a rider. I traveled to the East Coast and did a four-day Centered Riding clinic in Brattleboro, New York followed by a three-week Centered Riding internship in New York.

The focus of both the clinic and internship was on the four basics of Centered Riding, developed by Sally Swift: soft eyes, breathing, centering, and alignment. The latter was my weak link. My instructors recognized this and assisted me in coming to a better self-understanding of this all-important principle.

The dozen-or-so of us attending the clinic talked at length about the basics during the morning lectures. Alignment, we learned, is best explained by bringing a visual image to mind. We were then asked to picture the rider on a horse, and a plumb line extending from the ear to the shoulder, hip, and ankle. This is the ideal position at the walk, trot, canter, and—in the case of this Icelandic horse owner—tolt.

Lessons and teaching took place after lunch. I was told on the first day that I’d be riding V, a thoroughbred/Lipizzaner cross. To say that I was nervous about this is an understatement; I had not ridden any horses over 14 hands in 12 years. Riding a 16-plus-hand horse took some getting used to. On that first ride V alternated between being sluggish and forward. My instructors subsequently informed me that I was riding in a chair seat position, with my legs forward of center. I also rode with my heels up and I slumped forward, particularly when V moved out. The latter is the default mode of the anxious returning rider.

Over the next three days, the three Level 4 Centered Riding instructors worked with me on in-saddle alignment. They raised my stirrups so that I wasn’t reaching as far with my feet. I stood on my tip-toes and gently lowered myself into the saddle, all while putting my weight downward, into my thighs—Sally Swift’s visual image being that of the rider having “stubby legs”. This, in addition to changing my leg position, enabled me to better sit on my seat bones. This made it possible to follow their trot-related directive, which was to ride posting trot and bring my pelvis to my hands.

My lessons at Sally Bauder and Karol McKarty’s Schenectady-based Hillcroft Stables complemented what I learned at the update clinic. I rode Gabby, a Halflinger, who in size and temperament was like Raudi at home. And as with Raudi, I lost contact with her when I slumped over.

Karol added a much-needed dimension to my training by doing body/awareness ground training exercises which were in the spirit of self-exploration. For instance, one day I put a child’s plastic pyramid on my head. Karol, seeing this, had me stand up and walk around her kitchen and living room. I felt myself grow taller, and taller still as she encouraged me to rise my head and neck, relax my jaw, and lengthen and shorten my stride.

The following day Karol placed a cookie sheet with tennis ball on it in my hands. Keeping the ball in the center of the sheet was initially challenging. But after a bit, I was walking in a relaxed fashion and changing my strides.

My favorite exercise took place one windy spring day after the indoor arena lessons were canceled. Karol had me grab the wheelbarrow and put some arena cones out. She next told me to push the wheelbarrow around the cones. Down went my head. Up went my elbows. And yes, the slump reappeared.

Karol then worked me in a piecemeal fashion. She had me raise my head and look where I was going. She then directed me to again push the wheelbarrow, but this time told me to bring my elbows forward and relax my grip. Sally, who’d been watching, suggested that I breathe down my front and up my back. By the end of this session, pushing the wheelbarrow was an effortless endeavor, to a large part because I had released some bad alignment-related tension patterns.

I didn’t realize how much I learned until I returned home and resumed riding and interacting with my own horses. The difference in my pre- and post-April self is truly amazing. My embracing verticality has most definitely made me a more confident and connected rider.