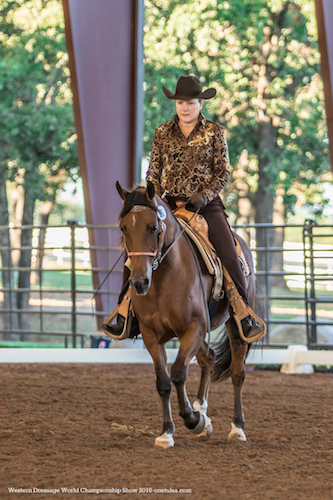 Systematic Training for the Western Horse

Are you interested in the precision, flow, and systematic training of dressage, but enjoy your western saddle, tack, and horse? Well, check out western dressage!

As in traditional dressage, western dressage is performed in a 20 by 60-meter arena. Letters are posted in specific places in the arena to indicate where certain movements are performed.

In western dressage, there are five sequential and progressive levels: intro, basic, and levels one, two, and three. Each level builds on the skills and training of the previous level and has four increasingly difficult tests.

Freestyle is also offered from basic level through level three. In freestyle, the rider chooses music and then designs his or her own test using required movements. The sport is governed by The Western Dressage Association of America (WDAA).

The mission of the WDAA is to provide a model of training and horsemanship which optimizes horse and rider partnership for the benefit of both, and to celebrate the American West where all these things came to pass.

The tests in western dressage are based on dressage fundamentals and showcase the useful working western horse. Tests were designed through a collaborative effort of members, respected horse people, and equine organizations, then revised and edited by a special division of The WDAA’s education committee.

The tests remain in effect for at least 4 years from the year printed on the test. What a great way to learn while having fun!

The Western Dressage Association of America is holding their 2017 Western Dressage World Championship Show September 28 to October 1st at the Lazy E Arena in Guthrie, Oklahoma. The show has been approved by USEF and recognized by WDAA, and the official prize list is now available on www.horseshowconsulting.com. The WDAA World Championship Show will feature four days of competition, with one day of rail classes and three days of western dressage tests. The focus of the show will be on top competition and a celebration of the discipline.

IDK Media Group will be providing a live feed of the 2017 WDAA World Championship Show that will be viewed and enjoyed around the world. For more information, visit www.idkmediagroup.com.

Kim Roe grew up riding on the family ranch and competed in Western rail classes, trail horse, reining, working cow, and hunter/jumper. She trained her first horse for money at 12 years old, starting a pony for a neighbor.

Kim has been a professional dressage instructor in Washington state for over 30 years, training hundreds of horses and students through the levels. In recent years Kim has become involved in Working Equitation and is a small ‘r’ Working Equitation judge with WE United.

Kim is the editor of the Northwest Horse Source Magazine, and also a writer, photographer, and poet. She owns and manages Blue Gate Farm in Deming, Washington where she continues to be passionate about helping horses and riders in many disciplines.