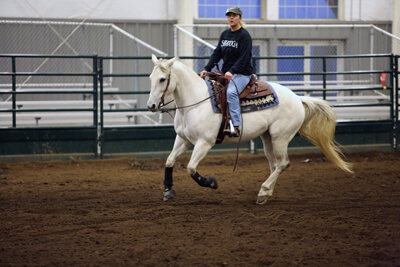 Facing the Reality of PSSM

It was a beautiful day for a ride. April had been off for a few weeks due to the removal of a small granuloma (tumor) on her back under the saddle area. I’d had a bunch of work done when the tumor was removed; teeth floated, annual vaccinations and a biopsy on two tumors on her belly. Lab results indicated equine dermal sarcoids and due to the type of tumor and the location we decided not to remove them as this could cause massive spreading and it was in a bad place for any type of surgery. April needed time to heal and be comfortable under saddle again so even though I was anxious to start riding it was important to be careful to warm her up and keep it a short session since she’d been off for so long.

A friend and I went to ride at the old Freewind Farm place, content to just enjoy the day. At first all seemed well. Then, while jogging around, April suddenly stopped dead in her tracks. No matter how much I urged her on she would barely move. Looking down at her head and neck I was concerned; there was not a dry hair on her body. Even her ears were soaked! Horrified, I jumped off and tried to lead her out of the arena. She didn’t want to move. It was as if every step was excruciatingly painful.

I quickly pulled April’s saddle and bridle off and dumped them in the dirt. My friend and I had to nearly drag her out of the arena. I knew she was overheated so we led her into the bath area and ran cool water on her legs. When she urinated I panicked, it was completely brown! I called Kulshan Veterinary Hospital immediately. After listening to her symptoms they felt the best course of action was to get her in to the clinic as soon as possible. She was eventually diagnosed with PSSM—Polysaccharide Storage Myopathy.

Learn how I now manage April’s condition, and continue to use her, on the blog—From My Saddle.