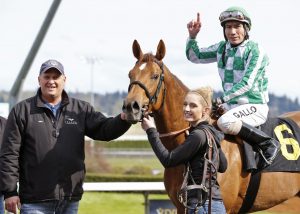 RETREAT YOURSELF IMPRESSES IN SUNDAY FEATURE

AUBURN, Wash. (April 9, 2017) – Trainer Doris Harwood, No. 1 all-time with 66 stakes wins at Emerald Downs, appears to have another bright prospect in her barn.

Retreat Yourself, who showed great promise in her lone start as a 2-year-old, turned in a sharp debut as a 3-year-old, rolling to a 1 ½-length victory in the $21,500 allowance feature for sophomore fillies Sunday at Emerald Downs.

Retreat Yourself dueled with Paddy’s Secret through fractions of :22.47 and :44.90, gained a slight advantage past mid stretch and edged clear for the victory.

Paddy’s Secret, ridden by Erick Lopez, held second and paid $3.80 and $2.60 while Getting Joellenned finished third and paid $2.60.
Afleet Hope and Semiprecious completed the order of finish.

Emerald Racing Club began 2017 on a winning note Sunday as Distinguishable raced to a 1 ¾-length victory in race five.

With Javier Matias riding for trainer Mike Puhich, Distinguishable ran 5 ½ furlongs in 1:03.25 and paid $3.60 as the betting favorite.

Now in its fourth season, Emerald Racing Club is composed of 200 members who each invest $500 to learn the ropes of Thoroughbred ownership. The club currently has two 4-year-old fillies—Distinguishable and McDove, the latter trained by Larry and Sharon Ross and tentatively slated to race April 22.

A Kentucky-bred daughter of Distorted Humor, Distinguishable was sold by Dr. Mark Dedomenico to ERC in a private sale last month, and Sunday’s win was her second in six career starts.

As usual when an ERC horse is victorious, the throng of owners caused the traditional winner’s circle photo to be moved onto the racetrack.