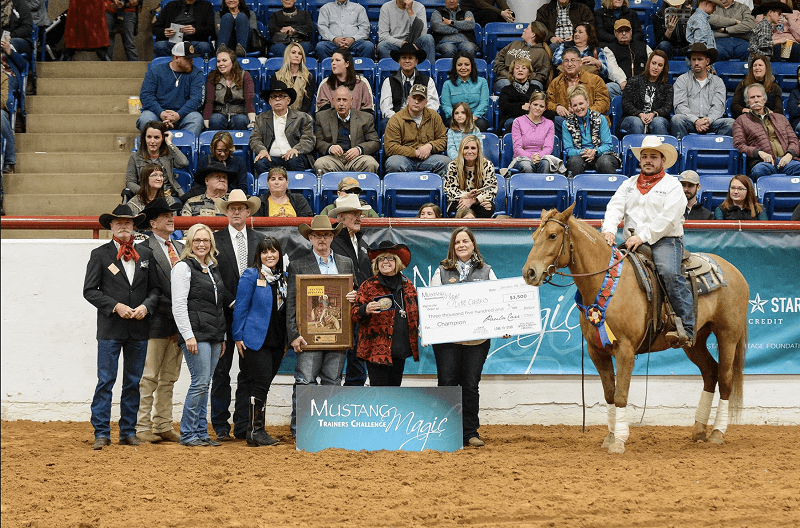 Trainers gave it their all at the invitational Mustang Magic event held in Fort Worth, Texas, January 24-26. With only 120 days to train their mustangs, 12 trainers from across the United States geared up for the exciting event held in conjunction with the Fort Worth Stock Show & Rodeo. However, it was Luke Castro of Rialto, California riding 6-year-old mare Maybe Shez Gold who captured the championship.

In September 2018, trainers were assigned 3-to-6-year-old mares to prepare for the Mustang Magic competition. The goal of the event is not only to give these talented trainers and mustangs a chance to compete, but also to raise awareness of mustangs and their versatility. Interested buyers were able to purchase these mustangs after the freestyle finals.

Preliminary classes began Thursday, January 24 with mustang maneuvers. Friday’s classes included handling and conditioning and a trail pattern. Following each class, interested buyers had the chance to meet each mustang and visit with the trainer. The top ten horse and rider duos advanced to the sold-out, entertaining freestyle finals on Saturday.

When preparing for Mustang Magic, trainers are wise to consider the stock show environment. With over 30,000 people on the grounds watching events and competing, it can be overwhelming. Just weeks before the competition, Castro was not sure his 6-year-old mare, Goldie, gathered from Cold Springs, Oregon, would be ready for the stock show atmosphere. However, his mom encouraged him to load up and make the 20-hour drive to Texas.

“She was a little spooky at home working with her and I wasn’t sure the Mustang Magic atmosphere would fit her. I honestly was not going to come,” Castro says. “When I told my mom, she said, ‘No, you’re going.’ I listened to her and here we are!”

When Castro went to pick up his mustang for the competition, Maybe Shez Gold was his second pick. He had a feeling from that first day that she would be special, but he didn’t know how much she would teach him in the end.

“From the first day there was a twinkle in her eye, and I thought maybe she’s good. So that’s how she got her name, Maybe Shez Gold,” Castro says. “She’s been the hardest horse I’ve ever trained. I didn’t even get on her until the start of December. She’s really taught me to slow down. She’s been a step-by-step horse. In trail, we cannot rush through the maneuvers. It’s been, take one step, then settle. That’s how her whole training went. If she did good for 15 minutes, then I would leave her alone.”

Castro and Maybe Shez Gold garnered a $3,500 check presented by Lone Star Ag Credit, a Cut Above belt buckle, and a framed print from Western Horseman for their championship. Maybe Shez Gold left Fort Worth to go to Troy, Texas with her new owner, Homer Dye, who purchased the mare for $2,100 during the auction.

“This win is such a big deal to me,” Castro adds. “My only goal this week was not even to make Top 10, but to have safe rides and good horsemanship. Goldie is just such an incredible animal. She really showed up for me this weekend and I hope her new owners enjoy her as much as I have.”

Competing mustangs were available for purchase through public competitive bid after the freestyle finals on Saturday. All 12 horses were placed into adoptive homes for an average adoption price of $3,700. See complete event and auction results at mustangheritagefoundation.org.

Presenting sponsors for the 2019 Mustang Magic event were the Mustang Heritage Foundation, the Fort Worth Stock Show & Rodeo, and Lone Star Ag Credit. The event was also made possible through a partnership with the Bureau of Land Management Wild Horse and Burro Program.

For more information on 2019 events and programs, visit mustangheritagefoundation.org.