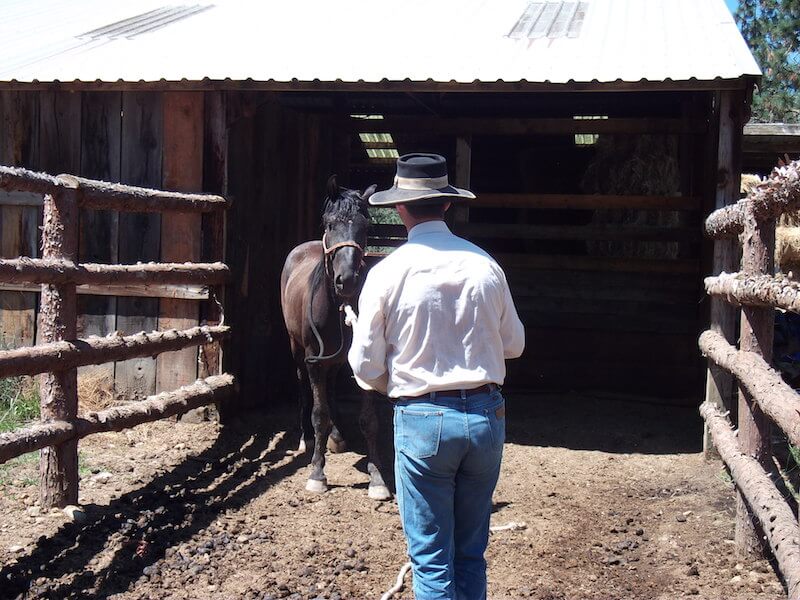 So, you’ve decided to adopt a mustang, the first step to the most loyal partner you will ever have. What should you expect during adoption and those critical first days with a wild horse? Mustangs are unique in the fact that they are looking for a leader, not a friend. Be that leader and they will be your friend. With respect comes trust, just like in the herd. The leader demands respect and in return he gains their trust. To be that leader, you need to be firm and decisive. With that said, let’s go pick up your mustang.

I won’t go into details on BLM requirements; you can get that information from them. Once the details are taken care of, you’ll have many mustangs to choose from at the facility. Don’t just choose your future partner based on color; spend considerable time watching the horses and observing how they behave toward each other. A mustang that is not bossy, aggressive, nervous or overly spooky will most likely be easiest to work with. Look for the horse that is relaxed or stays fairly calm even when the herd becomes stirred.  Always have the BLM put a rope halter and a snap less rope on in the chute before loading. This allows your new mustang to step on the lead rope, which helps them learn to give to pressure. It will save you some work later.

When you unload, it is best to put your mustang in a small pen such as a 12’x32’ rather than a 60’ round pen. As soon as possible, get a hold of the dragging rope. If you are capable of roping them then do so. Roping is a slightly quicker and more effective way to teach them to lead. You will pull, hold pressure and then release when the horse takes a step forward. Your mustang is likely to rear, strike and try to bite the rope. This happens with both the halter and rope and if roping him. It is normal and he will get over it.

When you have him giving to pressure it’s time to touch him. Don’t be shy or apprehensive; approach the horse with confidence. Your mustang is not going to want you to touch him. Do it anyway. Best places to touch are the forehead, jaw or neck. Once you have your hands on him, you are going to pet and reward with soft kind words of praise. Upon realizing you are not a predator, he will want to know if you are the leader or his follower. Don’t be afraid to discipline your mustang and lose his trust, you don’t have trust yet anyway. It is a mistake to try to get trust first. What you really need is respect and the trust will follow.

The work you are doing now is the foundation for your relationship and needs to be done in a timely manner. Don’t wait around. The common misconception is that the horse needs time to settle into their new environment. This only prolongs the inevitable, so you might as well get it done. If you leave a mustang too long the human becomes only a source of feed, not the herd leader. Then, when you finally start to work with it, the horse becomes confused and disrespectful. As a trainer, I have worked with mustangs that have been left far too long without work. When this happens there are many problems, including things like an extremely dirty pen because the owners were too afraid to enter it. The horse often becomes aggressive and protective of his pen because it is all he has. He hasn’t learned respect in the time wasted and getting it later on is far more difficult.

By working him right out of the holding pens, your mustang will understand what is to be expected of him. It will give him confidence and trust in your leadership. Once your mustang is manageable, and you can approach him comfortably, it is OK to give him a day or two off to rest and “soak” on all the things that you have taught him. Continue to work on leading and touching to prepare for the steps ahead. Soon, your mustang will be ready to move on to part two. Groundwork.

Brent Rollins is one of the industry’s leading experts on mustangs. He has been called the “mustang whisperer” by Craig Cameron. Brent is an EXCA cowboy race judge, and Craig Cameron certified Trainer. Brent travels Oregon, Washington and California giving clinics and expos, promoting the mustang and their versatility. He educates adopters and potential adopters on what to expect with their new mustang and deals with misconceptions regarding mustangs and domestic horses. He also helps with problem horses. Brent believes that every horse deserves a chance to be great. For more information about Brent and his program visit www.brhorsemanship.com.