Creative Tools for an Unusual Situation

I come across some pictures the other day from about 20 some years ago. One in particular caught my eye, a photo of a deaf yearling paint I was ground training. This little horse turned out to be one of my best teachers. She made me think for myself.

Let me set the scene: It’s the late 80’s and I’ve been tutored by legendary horsemen Mr. Ray (Hunt) and Tom (Dorrance). Their theories are just beginning to work for me. The Aussies have suddenly appeared in the horse world and reinvented every wheel known to the American Cowboy. Most everything (idea) belonged to somebody’s grandfather down – yonder, or was it Down Under? I was born down-under the Mason Dixon Line, but I don’t think that’s where they were talking about. Anyhow, I had a couple hundred colt starts under my belt when this filly came along.

First I worked her in the round corral and she hooked up pretty quick. It’s when I started to move towards the rear end that things went south. Getting cow-kicked is a polite way of expressing her actions. At first I thought she was just skittish because she hadn’t been handled at all. After several days I wondered if she couldn’t see good, or was beginning to cycle and her female parts were hurting, or she was just plain mean spirited. One of Mr. Ray’s favorite things to say was “Think.” I was looking for excuses for the filly’s reactions, not the cause. All I knew was at the drop of a hat she would kick, paw, or bite you, but I didn’t know why. Mr. Ray would have said, “You have to figure out what happened before it happened.”

I went back to basics and considered the old guidelines of mental, physical, emotional, and mechanical. She was plenty smart, plenty physical, and her emotions seemed gentle, provided you were in her sight or close to her head. Otherwise she was like a time bomb. The mechanical covers footfall and conformation and she was ok in that category as well. I then reconsidered her round corral work and sacking out. As long as she had both eyes on you she was ok. Once she hooked on she was like glue; no matter where I moved her eyes followed me. Wondering about vision, I tied her and walked away. I noticed that if she was aware of my presence she was fine, but if I left the immediate area and come back into her space she became spastic. While behind her I hollered to get her attention that I was approaching from the rear. She never acknowledged the sound. Long story short, the filly was stone deaf (vet checked later to prove it).

Now I felt like a heel losing my temper with her. She was handicapped and I had to figure out how to get her to accept sudden movement in her vision without kicking or pawing at whatever came within striking distance. Any movement on a different eye or trifocal vision caused her to strike out in self preservation. After thinking about draft horse harnesses and head gear with blinders, I put together a tire tube tied off to a surcingle with a grass string on each side. When the filly was turned out to graze or drink the tire-tube would drop down into her sight but not off her head, thus sacking her out without a human getting too close.

This worked well enough on a handicapped horse that I started using the idea for sacking out nearly all the colts I started. I got creative in other ways, too, even using live chickens which will help get the boogers out of anything. Twenty years later, I’ve stopped riding with chickens; I just want to be able to get on and stay there (By the way, don’t tell anyone about the inner-tube, it was really my granddaddy’s idea from down-yonder).

Remember, “There’s one bit that works on all horses: a bit of knowledge.” Even if it is an inner-tube and a chicken. 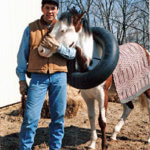 Pat Hooks is a day working cowboy from Texhoma, OK. Hooks has taught clinics at national horse expos and private ranches since 1989 and writes how-to articles for various national magazines, websites and is a published author. For more information visit: www.hookshorseranch.com or call 580-423-7482.