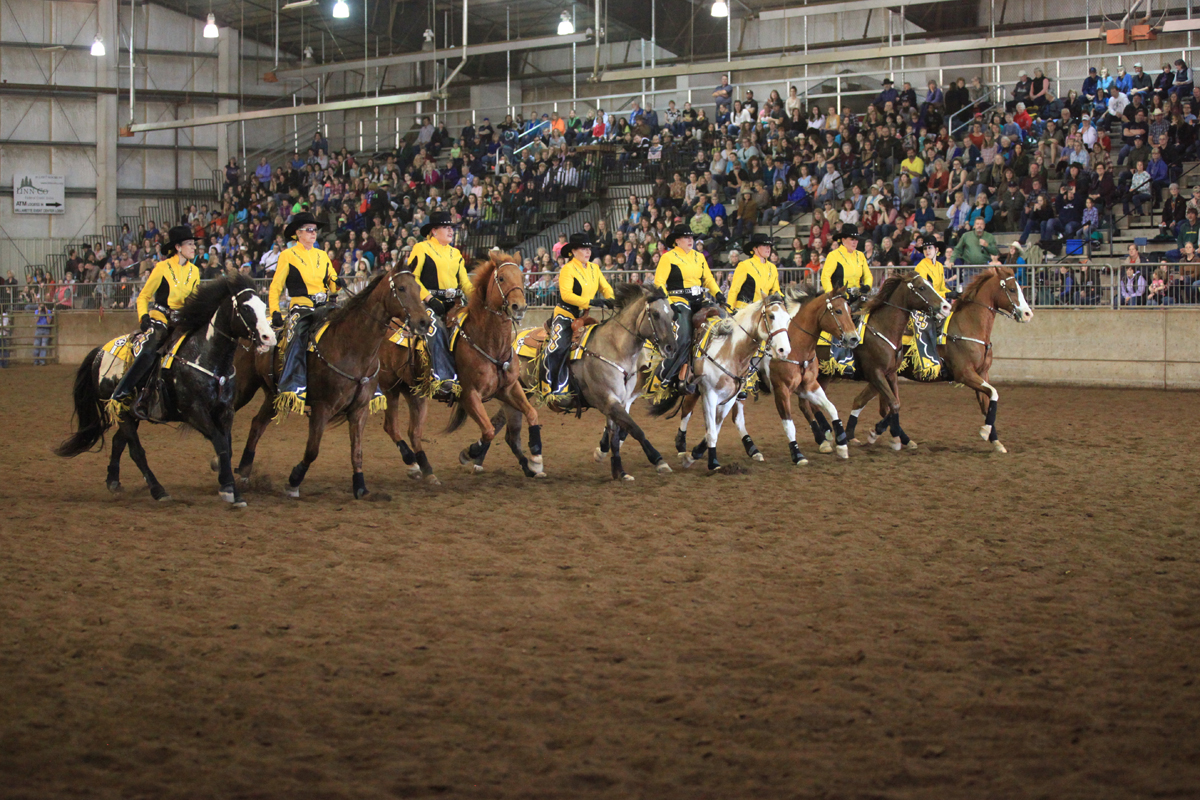 Thousands of equine enthusiasts from all over the United States and Canada, gathered in Albany, Oregon March 20th through the 22nd, for the seventeenth annual Northwest Horse Fair and Expo, presented by Akins Trailer Sales. One hundred ninety horses, representing 31 equine breeds were on hand to perform for audiences, and celebrate the spirit of the horse! Top equine experts were also featured, providing education and entertainment throughout the weekend. “We were very pleased with the super turnout this year, and people seemed to have a great time!” said John Cloe, Northwest Horse Fair and Expo Founder and Manager. “We hosted horse lovers of all ages, who enjoyed horses of all types, sizes and colors, and that was topped off by beautiful spring weather for the festival!” Mr. Cloe continued.

For the first time, the Northwest Horse Fair and Expo hosted Charles Wilhelms’ Ultimate Super Horse Challenge. Twelve horse/rider teams squared off in a variety of tasks and exercises, including trail obstacles, equitation patterns, working cattle and a Meet and Greet with expo crowds. Charles Wilhelm summed up what judges were looking for when he said “A Super Horse can appear in a parade one day, work cows the next, compete in an equitation class the following day — and more. The Super Horse can do all that with lightness, cadence, carriage, fluidity and responsiveness.” When the judge’s scores were tabulated, the Ultimate Super Horse 2016 Northwest Horse Fair & Expo Champion was Kayla Wright from Sandy, Oregon. Kayla won a Charles Wilhelm custom saddle, a Championship buckle from the Northwest Horse Fair & Expo, and additional prizes from USHC sponsors. Reserve Champion was Lynne Knox of Midpines, California, who received $500 cash and prizes. Third Place was presented to Sheri Wheeler of Crabtree, Oregon; fourth place was awarded to Tammy Burgard of Shawnee, Oregon and the fifth place went to Dee Myers of Baker City, Oregon. Judges for the event were Peggy Cummings, Jason Nagel and Mark Bolender.

Some of the fanciest horses at the expo were actually model horses, as Breyer Horse hosted BreyerWest, a two-day model horse show, which attracted competitors from all across the United States and Canada. In addition, collectors and hobbyists of all ages enjoyed seminars, activities and crafts with model horses, throughout the expo weekend. A beautiful live Breyer horse, “Smokin’ Double Dutch”, was also on–site at the expo to “sign autographs” and pose with admirers for photos.

The expo provided a variety of fun and exciting entertainment showing the diversity and beauty of horses! The BlackPearl Friesian Dance Troupe provided an array of elegant entertainment including a medieval fantasy drama with horses! A Welsh cob stallion performed graceful Grand Prix Dressage movements, punctuating the stunning choreography performed by the Dance Troupe, decked out in sparkling gold jackets. Their “live carousel” act created a kaleidoscope of color as costumed riders wove an imaginative merry-go-round with animated horses. The Riata Ranch Cowboy Girls showed off fancy trick roping plus daredevil trick riding stunts at breakneck speed that had the audience on the edge of their seats! The Rogue Mounted Archers were right on target as they shot arrows from the backs of their galloping horses! And the Mane Attraction Rodeo Performance Drill Team mesmerized crowds with their precision and fast-paced maneuvers to music!

Dozens of horses demonstrated the strength and athletic abilities of a multitude of horse breeds in the Breed Demos, Stallion Reviews and special presentations. Some represented breeds from foreign countries, while others showed off American breeds, giving audiences an inside look at the diversity of equine in color, size, movement and use.

The horse stall barn was open to the public to view all the expo horses, and to allow spectators to visit with horse owners. Awards were given for the Best Stall Decorations, in two divisions. In the Stallion Division: first place honors went to Hartley Performance Horses, LLC of Harrisburg, Oregon; with the second place award going to EquiPleasure of Oakland, Oregon; and the third place was presented to Wild Horse Mountain Ranch of Sherwood, Oregon. The first place for the Breed Category went to the Northwest Cavalry Association; second place was awarded to Cascade Icelandic Horse Club; and the Northwest Andalusian & Lusitano Association took the third place award.

Two large trade show buildings were once again filled to the brim with vendors, selling a wide variety of products for horse owners and horse lovers. Shoppers enjoyed a large selection of wares, as well as show specials!

The Northwest Horse Fair and Expo will be presented next year on March 24th through 26th, 2017, at the Linn County Fair and Expo Center in Albany, Oregon. Clinicians already confirmed for next year’s expo, include Steve Edwards and Van Hargis.

For more information about the Northwest Horse Fair and Expo, go to www.equinepromotions.net, email [email protected], call 765-655-2107, or follow us for late breaking details and updates, on Facebook and Twitter.