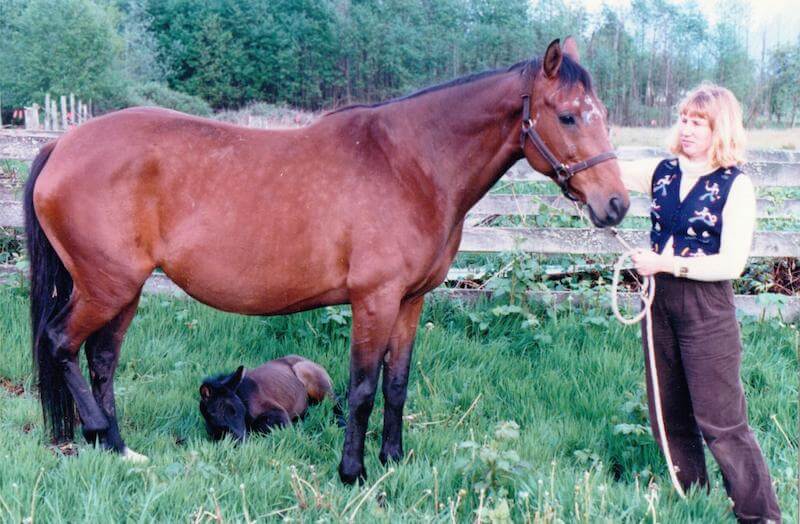 How Owning an Unrideable Thoroughbred Changed My Life 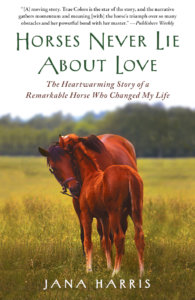 “So, why would you want to write about an old horse?”

I got used to this question while writing a book about my broodmare, True Colors, and always thought, Because, if I am one someday, figuratively speaking, I hope that I’ll be like True Colors, a sleek athletic thoroughbred until my dying day. There are many other reasons I wrote the book, but I don’t say them out loud. Non-horse people usually don’t get it.

When I first started to organize my thoughts into stories about her, I wondered why only the lives of famous horses get recorded? Why shouldn’t someone write about the everyday heroism of the tried and true? True Colors was just your average, pretty, raised-for-the-track-but-never-raced Thoroughbred. She lived so long and took up so much space in my life that she became a fixture of my landscape, not unlike an appendage you can’t imagine losing.

In her youth TC, as I called her, was nearly impossible to handle, yet she produced six live foals, gifts for which I will always be grateful. In her later years I gave up trying to train her, and started to just enjoy her in the same way I enjoyed the roses and Forget-Me-Nots in the runaway garden outside my kitchen window. Those flowers burst open spring after spring, whether I weeded them or not. Like my bay mare, I could count on them.

In her old age I didn’t have to worry about exercising True Colors or keeping shoes on her. I’d long ago given up pulling her mane or trying to clip her. She’d never worn a blanket, she was too claustrophobic.  When she finally allowed me to shelter her arthritic body, she would only wear used turnout rugs—the whiff of newness too foreign to her. She wore the same nylon halter for her entire life. The leather ones I bought for her must have reeked of slaughter; I could never get one on her before she shied away.

TC was the horse that never left the farm to go to a show, or on a trail ride, or to the vet hospital—not because she wasn’t worthy of medical attention, but because she always managed to heal herself. She was the horse that didn’t mind being left alone in the barn or the field and, if she did, never complained. She wasn’t fond of grain but ate any hay I put in front of her. As an equine “Nana,” her assistance became indispensable in keeping the others calm while convalescing or being weaned. There was nothing “alpha” about her; I thought of her as an anchor.

She never overate, a remarkable trait in a horse. Even when she could no longer tolerate having her teeth floated, she kept her weight on and never colicked. It was nearly impossible to give her a vaccination, so the only veterinary care I forced on her was a tetanus shot. In her dotage she developed Cushing’s syndrome, a disorder of the pituitary gland that, if untreated, causes severe laminitis. A milligram of Pergolide a day secreted into her feed for the Cushing’s, plus a gram of Bute once in a while for her arthritis, assured that I wouldn’t lose her to founder. I thought she would live forever.

Disaster, it has been said, lurks in the one place you forget to look for it. The summer that True Colors turned twenty-five, I almost lost her to the bite of a brown recluse spider smaller than my thumbnail. I feared she was done for, but, as had happened so many times before, she surprised me. The poisoning caused no permanent damage to her liver or kidneys and she thrived for years, filling my personal space physically and mentally. I thought of her as my soul mate.

The poet and novelist Alice Walker said it best: Horses make a landscape more beautiful. For years, whenever I looked at the back pasture I saw my blood bay mare grazing there, her long mane the color of burned sugar, her easy-care coat polished as a mahogany table.

When the end finally came, True Colors was ill only an hour. After serving me for years, even her last breath caused me no trouble. Horses are so large, strong and noble that it is shocking when they are gone. It’s been months now since True Colors transitioned to the stars. Still, when I walk TC’s adopted daughter, Ikon, down the barn aisle, the younger mare pauses of her own accord. Planting her feet in front of TC’s empty stall, Ikon juts her long head over the old mare’s door and looks searchingly inside: Where are you? Like Ikon, I too miss my old friend. Every day.

When a horse you love becomes a memory, that horse becomes a treasure; and the memory of a treasured horse is always a blessing.

Jana Harris is the author of Horses Never Lie About Love as well as many books of poetry, two novels, and numerous essays and short stories. She is the founder of Switched-on Gutenberg, an online poetry journal of the English-speaking world, and teaches creative writing online at the University of Washington. Jana and her husband, Mark Bothwell, raise horses in the Cascade foothills.