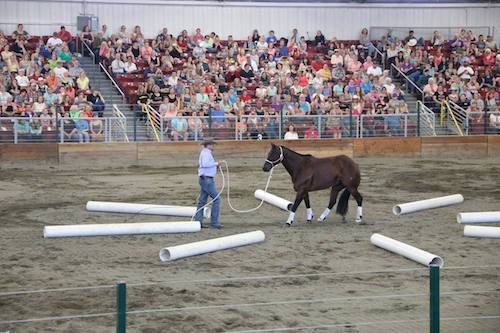 Whether you are just starting out in the equestrian world or have ridden all your life, most of us recognize big-name trainers like Clinton Anderson, John Lyons, and Pat Parelli. These trainers and clinicians have developed their own system for many years and travel the country actively teaching and training their signature methods.

I recently attended a Clinton Anderson clinic along with about two hundred other auditors. I asked some of them why they were there and what they were learning. A few common answers kept coming up. First on the list was confidence. The more we can learn as trainers, the more tools we have for solving our horses’ issues, the more confidence we have when working with them. Clinton never stopped teaching throughout the clinic. He asked questions of the audience, reinforced ideas learned so far, and made the learning accessible to everyone, from beginner to advanced. He used analogies and examples to strengthen his ideas. He even gave away free stuff, from halters and leads to DVD training kits, but the audience had to pay attention and answer questions correctly in order to win. All the while, he confidently worked with the horses and showed what his methods could achieve in a short period of time.

The people I spoke with also liked the use of example horses. We saw these “problem” horses dart into the arena, step on their owners, and act flighty in the new situation. In the end, they became willing workers whose issues (like spooking or being difficult loading on a trailer) were greatly improved. The auditors could relate when they could see the problems the example horse demonstrated and say, “My horse does that,” or “I’m working with a horse who does this.” The big take-away was spectators felt that their issues where not singular, and Clinton gave them motivation and hope.

Big, small, stubborn, flighty, or lazy, all horses have their own quirky training issues that we need to solve. But without the right knowledge and tools, we can’t get very far. Attending a big name clinic furthers our education and allows us to keep our training consistently and confidently moving forward.

Aliena Hook grew up in the Northwest and discovered horses at a young age while attending a birthday party. Beginning with her first rides and through many years of training, Aliena has strived to develop her own way of training based on natural horsemanship and focusing on the bond between humans and their horses.
When she’s not riding, she is writing. Aliena is currently working on her first book about her rescue horse Orion, and the issues surrounding the horse slaughter industry.
Aliena lives and works in Bellingham, WA and owns two Arabian geldings that she trains and learns from on a daily basis. She is a senior at Western Washington University, and hopes to pursue the careers of both trainer and writer in the near future. Contact her at [email protected] or through Facebook.