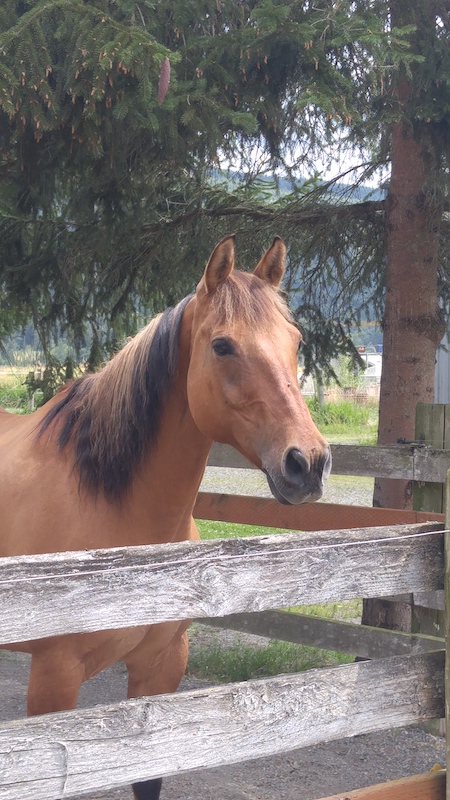 Not long ago I heard a strange noise coming from one of my paddocks. Part cough, part grunt, I worried one of my horses might be choking. I found my gelding standing calmly under his tree appearing to hiccup loudly and rhythmically. As I observed him I noticed he didn’t seem to be in any distress or discomfort. The episode lasted about 10 minutes. I called my vet and she informed me this condition is called synchronous diaphragmatic flutter, or “thumps” and it can be a serious condition in horses.

Commonly observed in event and endurance horses, thumps indicates an electrolyte imbalance. Usually the culprit is low calcium, but it can be brought on by low levels of other electrolytes such as sodium, chloride, potassium and magnesium.

Thumps usually occurs in horses that have been working hard and for a longer time than usual. It’s also seen in horses that have sweated to the point of dehydration, gone off their feed, or had a long, stressful trailer ride. Even overeating can cause the condition. It can also be a problem for lactating mares.

Another serious cause can be cantharidin poisoning. Cantharidin is the chemical found in blister beetles, which can be lethal to horses when consumed in alfalfa hay.

Thumps can be a frequently recurring problem for some horses. These animals may have an injury to the phrenic nerve or have chronic imbalances of essential minerals.

Regardless of the reason, if you observe thumps in your horse your veterinarian should be called. She or he may decide to take a blood sample in order to better diagnose the problem. Because it impacts the heartbeat and breathing, horses with thumps are frequently not allowed to continue working after the condition has been observed at a vet check during a competition. Thumps is not a life-threatening condition, but it does indicate a metabolic imbalance. If this imbalance is allowed to progress it may become dangerous.

The mystery with my horse is he had not experienced any of the above situations. In light work, he hadn’t been sweaty or stressed in any way. I had recently added a small amount of alfalfa to his diet to increase his protein levels. Ironically, the addition of calcium-rich alfalfa can actually cause low blood calcium in some horses. This is because when there is plenty of calcium present in the horse’s diet it can impair the body’s ability to utilize calcium from normal body stores, such as bone, when the horse needs it.

The weather had been unusually hot and humid, which might have been the culprit. Though it seemed my horse had been drinking normally, it’s possible he hadn’t been compensating enough for the uptick in temperatures. I had already been supplementing my horse with loose salt and magnesium. My vet’s advice was to remove the alfalfa from his diet, and that seems to have done the trick, as I have not seen a recurrence of the thumps.

In the future whenever it is hot or this horse gets physically stressed I will supplement him (and my other horses as well) with a paste electrolyte. Electrolyte supplementation remains the best way to keep thumps from occurring.

Kim Roe grew up riding on the family ranch and competed in Western rail classes, trail horse, reining, working cow, and hunter/jumper. She trained her first horse for money at 12 years old, starting a pony for a neighbor.

Kim has been a professional dressage instructor in Washington state for over 30 years, training hundreds of horses and students through the levels. In recent years Kim has become involved in Working Equitation and is a small ‘r’ Working Equitation judge with WE United.

Kim is the editor of the Northwest Horse Source Magazine, and also a writer, photographer, and poet. She owns and manages Blue Gate Farm in Deming, Washington where she continues to be passionate about helping horses and riders in many disciplines.