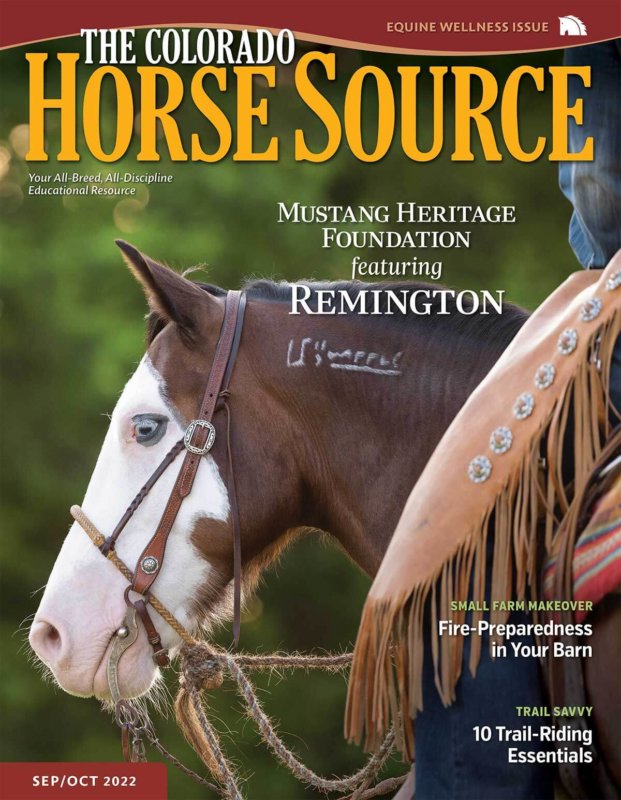 Story and Photos provided by the Mustang Heritage Foundation

Born on the range in 2015, Remington (Remi) hails from the well-known Salt Wells Creek Herd Management Area (HMA) in southern Wyoming. His sire, Cheveyo, was a highly photographed black, curly stallion who passed away on the range in January 2022. His dam, a beautiful Pinto mare that currently resides in a long-term holding facility in Idaho, was gathered with Remi in 2017.

Remi’s story is the story of so many American mustangs.

Closely monitoring population, water, and forage in HMAs across the American West, the Bureau of Land Management (BLM) strategically gathers excess wild horses and burros when needed to ensure the health of the herds and the rangelands they call home. These horses are then offered for adoption to the public through in-person and online events, as well as a partnership with the non-profit organization, Mustang Heritage Foundation (MHF).

MHF was founded in 2001 by wild horse and burro advocates who saw a need for education and placement. Since that time, the MHF has developed a variety of programs designed to break down the barrier of entry for those who would like to give a good home to a wild horse or burro but may lack the skills, time, or facilities needed to do so. By partnering with the BLM, MHF has placed over 22,000 horses into private care and saved taxpayers millions of dollars each year.

Gathered in 2017 as a 2-year-old, Remington found himself in the pool of eligible horses for the 2018 Extreme Mustang Makeover, Player’s Choice—one of the MHF’s many programs. For this event, trainers personally selected the mustang they wished to compete with, different from the draw system used at most Extreme Mustang Makeovers. Trainers were given access to brief preview videos of available horses, and Remi caught the eye of trainer Mary Kitzmiller. Normally attracted to “plainer” horses, Mary couldn’t stop replaying Remi’s video; there was something special about him. She waited on pins and needles for Remi to make his way through at the very end of the adoption. Nervously, she placed her bids expecting to have more competition but ended up securing Remington for just $600.

Well versed in the temperaments of the horses from this HMA, Mary was pleasantly surprised when Remi followed in the footsteps of the horses she’d had before and took his training in stride. Early on, Mary was contacted by a film crew wishing to document his journey for an upcoming documentary about wild horses. The crew closely followed Remi, Mary, and several other trainers as they prepared for the competition in Fort Worth, Texas.

With just 100 days to prepare, Remington and Mary worked together to develop their partnership ahead of the competition. Throughout that time, Remi continued to prove Mary’s initial feelings right; he was special. Everything she threw at him, he picked up on…and fast. As a professional trainer, she’s quick to tell you he was easier to work with than many of the domestic horses under her wing.

So, when competition time rolled around, she was confident they were ready.

The Player’s Choice competition took place at Will Rogers Coliseum in Fort Worth, Texas, drawing sell-out crowds and talented trainers from across the country. Despite all the potential stressors, Remington handled everything like a pro. He breezed through his preliminary classes, placing well enough to land in the Freestyle Finals where he and Mary performed a now famous Garrocha routine and placed 10th overall.

As part of the MHF’s mission to place as many trained wild horses into homes as possible, the horses that compete in the Extreme Mustang Makeovers are offered for competitive bid adoption following the event. Mary knew this going into Remi’s training, but during their time together she discovered she couldn’t let him go. If she wanted to bring him home, she’d have to bid.

The adoption was a whirlwind of people hoping to bring home the horse of their dreams but, at the end, Remi loaded back onto Mary’s trailer that night.

In the years following the Player’s Choice competition, Remi’s training has continued, and he has performed routines and demonstrations across the country. Most recently, Remi was featured at Road to the Horse in 2022, bringing awareness to just how special and versatile America’s wild horses truly are.

Additionally, Mary and Remi have begun showing with Stock Horse of Texas in the extremely competitive open division where he is thriving.

“It’s such a pleasure to take him to events where people aren’t that familiar with mustangs and show them what wonderful horses they can be,” Mary says.

For more information on the American mustang, visit americasmustang.com. To learn about Mustang Heritage Foundation, visit mustangheritagefoundation.org. Read about Mary Kitzmiller at marykitzmiller.com.

See this article in the September/October 2022 online edition: