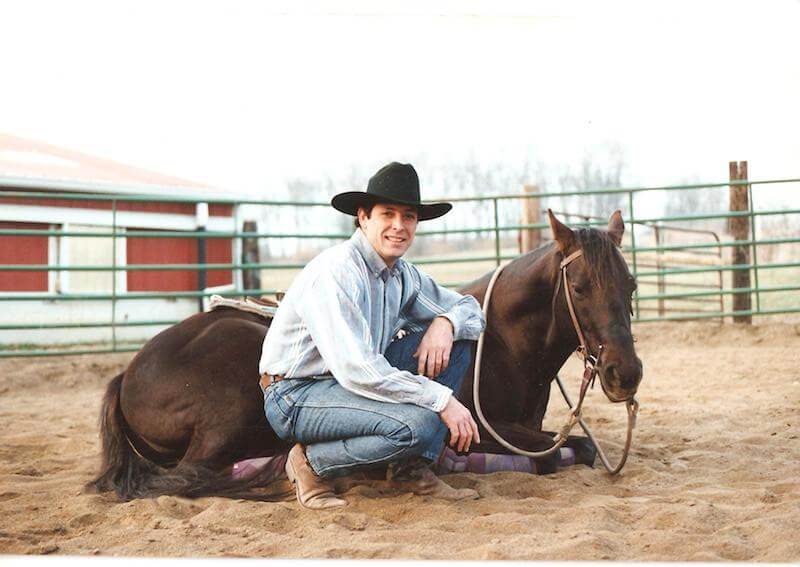 A Useful Method to Train Your Horse Physically and Mentally

In years past horses were started as three and four year olds. Numerous ones I have started at 7 or older. They were a lot bigger, stronger, and smarter than the long yearlings, and coming three year olds that are started today. I mostly worked by myself and I had to figure out how to work around these older horses. Many of the older studs I worked with had their bluff in on the owner and some weren’t bluffing at all. So the following method is what worked for me—I taught them to lie down.

Pictured from years ago, is an own son of Zan Parr Bar. Zan was much older than usual when I started him under saddle. He had produced some nice get and, in the owners mind, gelding him was out of the question. Zan went on to make a great demonstration horse and I was proud to have had the honor of working with him.

Begin by gathering up the following tack: Soft towel/rag/breeding hobble, halter and soft lead, long lariat/mecate line, old saddle or a surcingle cinched over a blanket.  Move the horse to a pen with deep sand or soft ground.

Step one. Tie the hobble to the long line and place around the left front leg. Step two. I run the long line under the horses belly, through the off side stirrup, over the fender, then up and over the saddle seat. This keeps the horse from getting rope burnt and makes for a mechanical pulley that is much easier on the back.

Begin teaching by pulling the horses leg up with your rope. Get the horse accustomed to lifting his leg first. Next, while the leg is up, take your lead and ask the horse to back up lightly. They will go down partially in the front end as to bow. Release them and allow them to come back up. Repeat this step several times.

Continue until the horse will drop the left knee/leg down on the ground. More than likely the horse will tire and place its head between its legs or on the extended leg. Here is where it gets tricky. Once the horse will stay down on its front end, take your body and shove them over. The horse basically falls over at this point but doesn’t know how to lie down.

Once you can get your horse to continuously lay down by use of the long line and lead (about 25-30 times) look for the same results from the horse, but now use less pressure with your cues. Remove the saddle, rope, and hobble. Continue by first asking the horse to pick up its leg with a hand cue to the leg. Then gently back them up with your lead as before. Give much praise, encouragement, and use of verbal cues. This learning block should take another 15-20 times of lying down.

Now look for even less pressure from the human. Pick out a cue spot on the horse and use your verbal cues as in photo 4 where I chose to pinch the withers. By now there shouldn’t be as much struggle from the horse to get back up. Make laying down a real good place to be.

The pictured horse, Cutter, would eventually lie down to a verbal command from over the fence. When I taught a semester of colt breaking at OPSU Cutter entertained a guest from France by allowing her to mount while he was lying down. Cutter couldn’t speak French and she couldn’t speak English. However, the French ladies eyes did speak a universal language when Cutter come up with her aboard and shook off the arena sand.

Until we meet again I hope the good Lord blesses you, your family, and your livestock. Always remember: “There’s one bit that works on all horses, a bit of knowledge.” Even if it’s a French speaking horse.