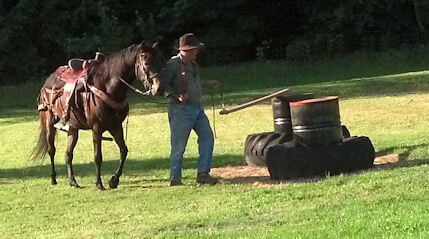 Breaking Down the Elements

We have all sorts of fun visitors at Fire Mountain Trail Course and Darryl Weidkamp and his horse Clancy were no exception. Darryl is an avid backcountry rider and had previously been to our trail course as a volunteer during an outreach “Round Up Ride” that the Skagit Backcountry Horsemen had hosted at our facility in late June. Darryl spent part of the day watching the participants making their way around some of the challenges during the hosted event and decided to come back to have some of his own fun in the sun.

Darryl brought his nephew along for company when he came back for his own visit, and I watched them as they made their way around the course checking out some of the various challenges.

I always caution visitors about this challenge because if it is not performed correctly the board will fall to the ground, banging and clanging against the metal barrels along the way, possibly giving a serious spook to an unsuspecting horse. As Darryl lead Clancy in the direction of the pinwheel, the horse immediately made it known that he did not want to go anywhere near those strange, scary looking barrels and the board lying across them. I watched, like a mouse in the corner, as the story of Clancy and the pinwheel monster began to unfold.

Darryl brought Clancy over to the barrels as close as he could get, holding Clancy at the end of his lead with one hand and stretching to take hold of the board with his other hand. He moved the board slowly back and forth at first, and then started banging it on the metal drums to make noise – softly, then gradually louder – as he carefully brought Clancy in closer to the barrels. Once Clancy was comfortable with the sound of the board on the drums, Darryl took the next step and dropped it to the ground several times, letting it bounce freely as it landed so Clancy could see it from that perspective, as well. A lot of people would have set the obstacle back up and mounted their horse at that point to execute the challenge from the saddle, but being the backcountry rider that he is and familiar with the activities related to packing supplies into the wilderness, Darryl took the matter even further and, while still on the ground, removed the board from the barrels and laid it across Clancy’s saddle, first from one side, and then the other, teeter tottering it each time; and even allowing one end of it to hit one of the barrels to make noise as he leveraged it up and down. This gave Clancy the opportunity to see the board from yet another peripheral vision parameter—very important! Darryl took his time with each step giving attention to the individual components of the obstacle and not moving on to the next piece until Clancy was ready. Ultimately, Clancy was completely relaxed and even started exploring the various pieces of the pinwheel on his own initiative.

Finally, Darryl set the board up on the barrels and mounted Clancy to perform the challenge that the pinwheel offered. Darryl and Clancy accomplished it easily and comfortably, circling with the board in both directions, before calling it a day.

I thoroughly enjoyed watching Darryl working with Clancy, smiling with pride for both of them. They did a great job of showing yet another example of what it means to ride well grounded.